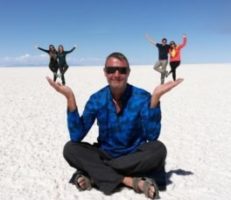 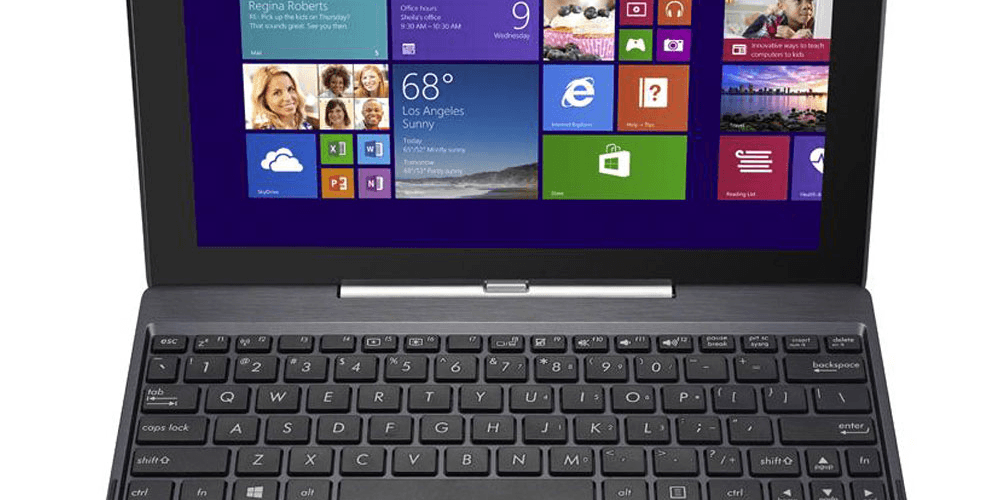 I replaced mine with an ACER SWITCH 10E. 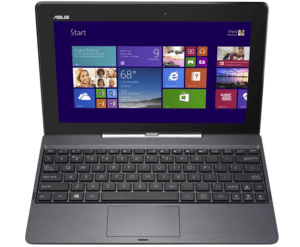 In summary, it is a convertible tablet / laptop with:

If you check out the internet, it gets excellent reviews from all of the usual information sources.

I wasn’t worried about CPU power. What I was doing didn’t need Core i7 technology.

I find that the problem with internet reviewers is that they don’t seem to actually really use the products enough to give them a full assessment. They seem to just look at the specs, the price and run benchmarks.

This is what I found in reality…

Also, the microUSB port and cable are not the most robust, so you are always worried that you might have got it wrong (and don’t want to force it in).

This means that, invariably, you have to pick up the T100, and take care every time. It shouldn’t be that hard… all that’s needed is a round power port with a round connector.

Secondly, the battery is spec’d to last 11-12 hours for normal use from full charge. What they fail to tell you is that it takes over 12 hours to re-charge the battery from empty… you are forever trying to charge the T100 so that you can use it.

On some occasions, I have run it down to 4% and plugged it in at 6pm to charge it ready for the next day. The light glows orange to say that it is plugged into power – so you assume that this also means re-charging. Without any logic that I can determine, the next morning the T100 has 0% charge and has not re-charged at all.

I tried everything that I could think of to get the charging working consistently. I bought a separate Travel Plug for it and plugged it into its own wall socket.

I tried putting a Power Bank in between the wall socket and the T100 and connected the T100 to the 2A output from the Power Bank.

I tried disconnecting the keyboard and powering the T100 off to eliminate the possibility that the keyboard was draining power.

In the end I got the most consistent results by using a separate power plug, disconnecting the keyboard, and powering the machine down. This made it totally useless whilst charging.

Thirdly, it won’t charge whilst you are using it. Many a time I would wake up in the morning to find that it wasn’t 100% re-charged.

One of the reasons is that it takes longer than 12 hours to re-charge the battery from empty… which means that when you get home at 10pm it won’t have enough time to re-charge by breakfast.

I tried to work around this by taking my power lead with me during the day. If I could get near mains power, I would plug it in hoping that it would charge whilst I was using it. It does not. It continues to burn up  battery even when on mains power (albeit slightly more slowly).

A search of the internet indicates that the problem is that you need at least 3amps to charge the T100 whilst using it. This requires a special adaptor that is not provided by ASUS.

Lastly, this means that you are for-ever booting the T100 on and off and for-ever plugging it in and out of the keyboard. Nobody that I met with a laptop and a proper power transformer had my power problems.

Simply put, when you are not using the T100, you are spending the rest of your day trying to re-charge it (or making sure that it is re-charging). You end up spending all day worrying about your T100.

Firstly, the keyboard misses letters frequently. Also the mouse pad jumps the mouse to the edge of the screen now and again. The touch pad is so small that you need to turn gestures off (otherwise all sorts of crazy things start happening).

The Tablet connects to the Keyboard using a central data connector that is supported by two locking pins each side of that connector.

However, those locking pins are too central. What happens is that the keyboard ends up balancing on a piece of plastic that is less than half the width of the keyboard. This makes the keyboard wobbly – and caused a lot of bending (which is probably the cause of the keyboard problems).

Secondly, inside the locking mechanism is some felt that has been stuck in with glue. With all of the keyboard connecting and disconnecting going on (because of the charging problem) it doesn’t take long for that felt to start to get dislodged.

Now, I am a very careful person, but it happened to me within the first 2 months of using the T100 abroad. I actually bought the T100 about four months before that but only used it in Tablet mode – as I had a proper Core i7 laptop to do all of my ‘heavy duty’ stuff on.

The problem, if you don’t notice it, is that you end up putting stress on that connector. You also think that the connector is in place when it is not. Then you open and close the lid…

You only need to do this a few times before you end up with a crack across you screen starting above the connector. Mine did an arc to the middle of the left hand side of the screen.

Once you have a crack, you lose touch screen capability in that area of the screen. That makes Tablet mode impractical for anything other than simple stuff – like web surfing. That means that you have to have the keyboard plugged in to use it at all… and, that makes the matter worse – as you increase the frequency of connecting and disconnecting the keyboard.

Lastly, when in laptop mode, the screen tilts back to only (about) 110 degrees. This is because there is a weight imbalance between the Tablet and the Keyboard. If the screen were able to tilt any further back, the laptop would fall over backwards.

This makes laptop mode cumbersome to use. You cannot use it at a normal height. You either have to:

The screen-keyboard ‘balance point’ is actually at about 135 degrees… so ASUS could have allowed the screen to go back another 20 degrees (but didn’t).

I didn’t like the Office 2013 that came free with the T100. What I disliked the most was SkyDrive – and the fact that it wanted to synch stuff to the cloud – regardless of whether or not I did. You cannot disable SkyDrive – it is a fundamental part of Office 2013.

When I’m travelling around somewhere like Guatemala and trying to survive on old modem type internet connectivity speeds, I don’t want my tablet to be constantly trying to synch to SkyDrive.

I ended up doing a full restore on my machine. Removed Office 2013 (before installing it), and removed SkyDrive.

I, then, rebuilt the T100 with my own copy Office 2010 and the Dropbox that I have used for several years. 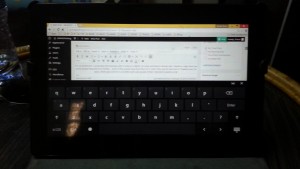 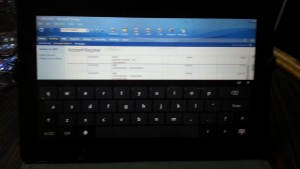 You soon discover that not all software works well on a Tablet when the Tablet soft Keyboard is loaded at the bottom. If your software has too much in its ‘top ribbon’ you end up with very little ‘working space’. All you can see is the top ribbon and the keyboard.

I found that I had to plug on the hard keyboard to work in applications like WordPress and Microsoft Money.

I found that this was also true when I did any serious work in any application like Office 2010.

As GRANDPAcking requires me to do serious work most of the time, the end result is that I was always using the T100 as a clamp-shell laptop. I hardly ever used it as a Tablet.

Even where I though I would use the T100 as a tablet, there was usually something preventing me from doing so… as an example, drifting off to a playlist at night was out (because that meant that it would not be re-charged by the morning).

The T100 comes with 64GB of MMC as standard. I decided to supplement this with an additional 64GB microSD card.

The idea was simple: I didn’t want to have to carry around additional storage with me and either:

Either way, it looked like I would end up carrying a Carry Case around with my to carry the bits that I needed along with my T100 Tablet. It sort-or defeated the purpose a bit.

I thought that I could just permanently pop in a 64GB microSD (or a 128GB when the become price competitive) and leave all of the extra pieces at home.

Wrong. The microSD is easily knocked and pops out very easily. It is just a matter of time before it is lost forever.

To overcome this threat, I ended up taping the microSD into the slot. This didn’t work fully either because, again, a knock would pop it out of the slot (but the tape would hold it there) but you wouldn’t know it until you tried to use it… then you had the fiddly task of un-taping it, re-loading it, and re-taping it.

The T100 is a great little convertible for people who aren’t really doing much. If that’s the case, why don’t they just buy a Samsung Galaxy Note or an iPad?

I would, now, be highly sceptical of any ‘convertible’ that:

Any serious user will, probably, reach my conclusion: I need to dump this T100 and get myself a small laptop (or what they used to call a Netbook):

All I need is something small and simple that works.

Do NOT follow this link or you will be banned from the site!