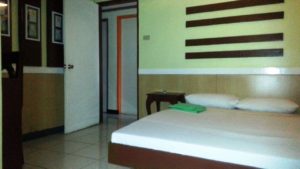 I had made my way from Malapascua Island to Ormoc and I stayed in the ORIENTAL PENSION PLAZA for 2 nights.

I only stayed for 2 nights in Ormoc so that I could have a quick look around and organise the rest of my trip to Biliran.

Ormoc is a grubby little place; don’t bother coming unless you are in transit.

Don’t bother staying over-night unless you need to. And, don’t pay more than PHP1,000 / night to stay in a Deluxe Aircon Double at the ORIENTAL PENSION PLAZA.

My hotel was an easy 500m walk to the Minivan Terminal.

I knew that the trip from Ormoc to Naval would only take 2-3 hours, so I didn’t start too early. I was at the Minivan Terminal at 8:25am. 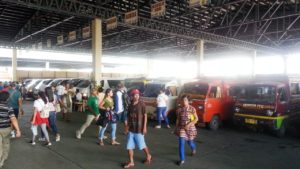 There are in fact 2 terminals: a Bus Terminal and a Minivan / Jeepney Terminal. They are across the street from each other.

Nowadays, I prefer to catch a bus – when I can. Even though they take longer than a minivan, I find them a lot more comfortable … and, on long trips, they play a movie to help while away the time.

It is easy to find the bus or minivan that you are looking for. They queue up in a line under a sign that states their destination. When the one at the front of the queue is full, it goes … and people start loading into the next one.

There are no direct buses to Naval from Ormoc. So I had to catch a minivan. The minivans leave about every 30 minutes during the day.

Again, this was a Filipino Minivan. They are smaller that the Tourist Minivans and have no luggage space. My suitcase wouldn’t fit under the back seat, so I had to pay a full fare for my suitcase to get a seat. My fare was 2xPHP130.

The driver invited me to sit with him in the front in seat #2. I placed my backpack on seat #2 to claim it.

I should have known better … the best seat is #3 (directly behind the driver); the second best seat is #4 (next to #3). Just as we went to pull away a large man opened the driver’s door and slid across to sit in the jump seat next to me.

The jump seat (seat #1 next to the driver) is not a real seat and sits over the gearbox ‘hump’. The person there has no choice but to infringe upon the space of the person sitting in seat #2 (me).

The minivan terminal is on the waterfront – right in front of the bangka terminal for the boats to Maripiri.

MY HOTEL – THE QUTCERR BED & BATH:

I had done my ‘usual thing’ and pre-booked my accommodation.

The previous day I searched AGODA.COM. The alarm bells went off …

I have been around The Philippines long enough now to know what to expect from the ‘cheaper’ / ‘budget’ hotels: not a lot.

Accommodation in The Philippines is, generally, a problem for GRANDPAckers … the accommodation is poor value for money. Everywhere. Anything less than PHP900 per night is likely to be backpacker and below the required GRANDPAcker Standard. 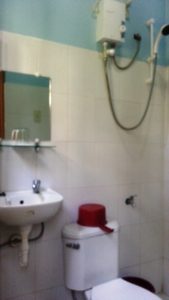 Experience told me not to go ‘cheap’ … I didn’t like the look of any of the options on AGODA.COM.

I got onto AsiaTravel.com. They had the Qutcerr (which was not on AGODA).

The Qutcerr had Aircon Doubles going for PHP1,000. They also had Aircon Singles going for PHP880. The room descriptions were exactly the same … but the PHP880 one needed to be confirmed. I suspected that they were the same room but discounted to PHP880 if they still had rooms left … in S.E.Asia they often confuse a Single with what we call a Double (they call it a Single because there is only one Double bed).

I took the gamble and booked the PHP880 room.

I arrived at the hotel at 11:30am. I was checked straight into my room.

I was wrong … but I got lucky … I had booked a room with a Single bed … but they upgraded me to an Aircon Double. 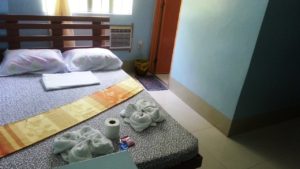 The room was small but clean and tidy.

It had a small wardrobe, a small desk, and cable tv (with English movie & sports channels).

It came with clean linen and toiletries.

The ensuite had a hot water shower with good water pressure and a vanity with shelf and mirror.

It was one of the best rooms for under PHP900 that I had found in The Philippines so far.

The staff were really friendly and helpful too. They provided me with information on how to get to Maripipi and information on where to stay, the best beach, and how to tour the island.

The trip from Ormoc to Naval is an easy one. Door-to-door it took me 3 hours.

My total cost was PHP260. 2 GRANDPAckers should budget the same.

The Qutcerr Bed & Bath is a good option if you need to stay overnight; book an Aircon Double.

Naval is quite nice and the waterfront comes alive in the evening with BBQs.

Why not REGISTER to stay up to date with our Postings and Retirement Reviews.

Do NOT follow this link or you will be banned from the site!